A dataset of molecules

A dataset of molecules

SMARTCyp is a tool from the University of Copenhagen (described in papers that can be found here) that predicts the atoms that are metabolised by Cytochrome P450 enzymes. It can be used to give a guide to whether your molecules might be rapidly metabolised. The methodology is described here and here.

The SMARTCyp calculation is slower than many other molecular predictions, and most suited to small numbers (10’s or 100’s) of molecules.

Our implementation is based on the Java source code provided by the University of Copenhagen. We have adapted it slightly to function as a Squonk service, but there are no material changes to the algorithm and the results should be identical to those generated by the SMARTCyp web site or download versions.

SMARTCyp uses an old version of CDK (version 1.4.8) in its implementation. Squonk’s SMARTCyp implementation also uses this version to ensure reproducibility of results. How this means that there is a small possibility that molecules handled by other CDK based processes (using a newer version of CDK) may not be handled correctly by the SMARTCyp cell (e.g. if there are bugs or changes in how molecules are represented between the CDK versions).

How to use the SMARTCyp cell 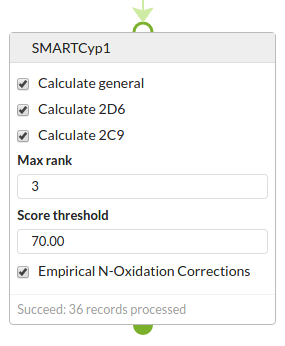 The options have 3 types:

How to view the results

Results (and metadata) are added as normal fields to the dataset, one field for each of the three Cyp calculations.

The best way to view the results is using the results viewer. Click on the Expand icon in the cell titlebar to open the Results Viewer. You will see the result fields displayed, including the rank, score and atom number.

To get a more visual representation change the highlighter (default is None) to one of the SMARTCyp generated fields. The atoms that are predicted to be metabolised are highlighted using a colour that represent the score. The colour scale used is a fixed scale suitable for SMARTCyp, ranging from 25 (brown colour) to 100 (steel blue colour) so that the redder the highlight the higher the predicted rate of metabolism at that atom. 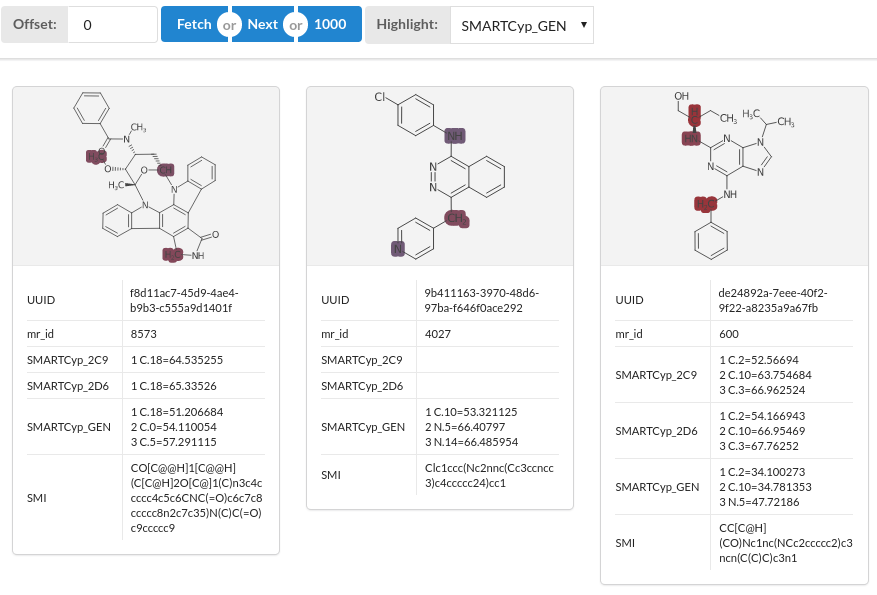