An alternative named rDock filtering where the cavity definition is part of the cell execution based on the reference ligand that is specified as one of the inputs, which avoids the need to generate this, but relies on hard-coded parameters for the cavity definition and most of the docking parameters. Hence this is simpler, but less flexible. This variant also allows to filter the docked poses based on their normalised docking score relative to the reference ligand.

rDock is a molecular docking program, originally created by RiboTargets, which became Vernalis. It was open sourced in 2012. For more information on rDock look here.

Key to using the rDock docking cell is providing the docking configuration as a zip file. This file must contain the following:

A good way of doing this is the Docking Validation project that Informatics Matters has created as an upstream project for Squonk. In particular there is an example for DHFR that you can follow that can be found here.

To generate the receptor structure you may need a third party program like MOE or Maestro, but we are hoping to provide a freely usable alternative in the future. To generate the parameters file and the cavity definition file see the rDock documentation. For information about Nextflow see nextflow.io. An example zip file is attached to this page.

The zip file can be uploaded using the ZipFileUpload cell.

For the rDock filtering cell you need to specify three individual inputs as described above.

This cell uses a lot of computing power. It is currently only suitable for around 1000 dockings (inputs * number of dockings).

This is a minimal example of running a docking experiment with the rDock docking cell: 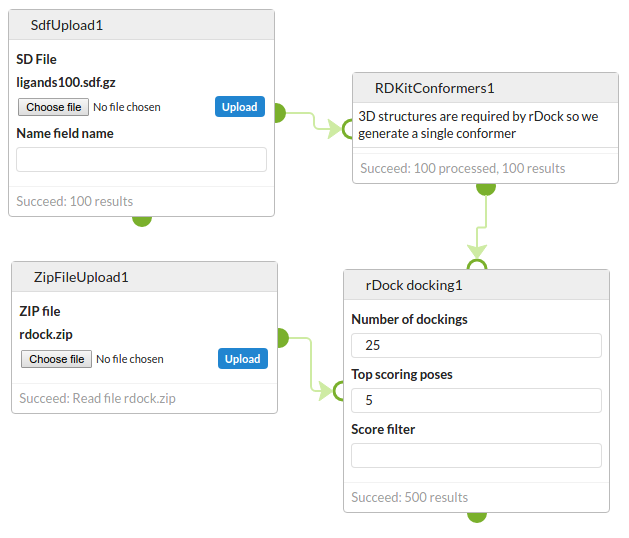 Typically you might view the output in the NGLViewer cell.

We plan much more for this cell, and related cells. Some examples: