An Introduction to Potions

Potions are one of Squonk’s mega-features. They provide a simple language for performing arbitrary data transformations.

All too often the hardest part of a workflow is getting the data in shape in the first place. This is what potions were designed for. Using the simple declarative language you can perform a wide range of data transformations. For instance:

Let’s start with an example. One of our favourite datasets is a tab separated text file containing smiles and data. To make best use if it we need to convert the smiles to real molecules and transform various of the data fields. To do this we use this potion: 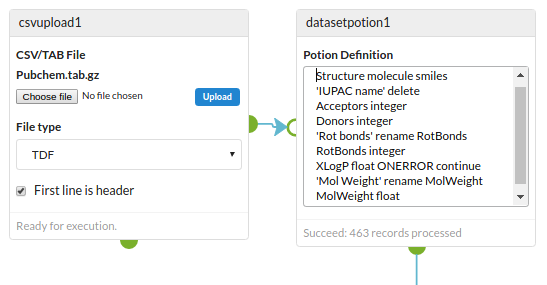 The potion is comprised of multiple statements, each on one line. It should be fairly obvious what is going on, but here’s a description:

Much more is possible, and this simple example only scratches the surface.

To use a potion locate the DatasetPotion cell from the cell palette (hint: search for potion) and add it to the notebook canvas. Connect the input and output, specify the potion in the text area and execute.

A potion is made out of one or more potion commands. Each command is a separate line.

A line starting with # is a comment and ignored.

Some commands work on the whole record.

This deletes every record. Not very useful!

This deletes the record if the condition is met. See below for more details of the syntax for conditions, but for now an example should suffice:

As you might expect this deletes the record if the value of the field named LogP is greater than 5.

These commands transform the data for a particular field. The basic syntax is:

The ONERROR part is optional and determines what happens if the value for a particular record cannot be converted. The ‘fail’ option (which is the default if no ONERROR statement is present) means that the whole process will fail. The ‘continue’ options means ignore the failures and remove those values (set to null). For instance, if the field you want to convert to integers contains some values that are invalid (e.g. non numbers) then you can use this to convert those that convert and omit those that don’t:

Field names must be quoted (single or double quotes) if they contain spaces. As a caution, field names with spaces are likely to cause problems, so you are advised to rename them so that they do not contain spaces (see the field rename command below).

The supported types are:

All but the molecule take an optional ONERROR statement, allowing invalid values to be ignored. In order these commands do the following:

These are the most powerful and complex commands, allowing fields to be defined using ‘formulas’. The basis syntax is as follows:

In all cases there us the field name followed by an equals sign and an expression. The expression is evaluated as Groovy code, with the filed variables for the record magically injected so that they can be evaluated. The expression can be simple or complex. Here are some examples:

Variable names to the left of the # operator can have spaces if they are enclosed with single or double quotes, but this does NOT apply to variables to the right of the . They should be renamed (see above).

The assignment of fld4 and fld5 uses methods from the java.lang.Math class which are imported (using a static star import) to make them easily accessible (without this they would need to be accessed using more clumsy syntax like Math.log10(fld1), though this type of syntax can be used to access static methods of other Java or Groovy classes).

The condition is an optional part after the IF term and before the ONERROR term (if present). Note it must be uppercase IF to allow it to be distinguished from the if keyword that can be part of Groovy language. A condition, like an expression is evaluated as a Groovy expression and if evaluated first, and if it evaluates to true then and only then is the expression part evaluated. This allows for conditional execution. Here are some examples:

When the IF condition is evaluated the result is always handled as true or false. Groovy is smart about this and can coerce numbers and strings to true/false values (e.g. zero is treated as false and any non-zero number as true). This is what is happening in the fld1 and fld2 assignments in the above example. For a full definition see Groovy Truth.

There can be an options ONERROR statement following the expression or condition. Note that is a condition is present the ONERROR MUST follow the condition. The ONERROR part defines what to do when executing the expression (not the condition) causes an error, in a way similar to that seen above for field transform commands. It can have values of fail or continue, with the behaviour being fail if no ONERROR clause is present. As an example:

A field’s values must be homogeneous in data type - all records must be the same datatype (e.g. all integers or all strings, not a mixture of integers and strings). When using conditional assignments it is potentially possible to break this rule which will cause errors, so be careful.

If the operation you are wanting to perform is very complex you might be better using a Groovy or Python script. Potions are supposed to be fairly simple.

Handling errors are an inherent problem as they can sometimes be a bit cryptic. If you are having problems break it down into multiple steps.

This simple command renames a field. Here are some examples:

This command allows to replace values with other values. This can be useful when cleaning up data that has annoying text values. Here are some examples:

The match and replace values are converted to the correct type for the field. For instance, in the second example, assuming that fld2 is of type integer then the values 1 and 2 are handled as integers. The terms ‘null’ is a special keyword that means the null object e.g. in the first example all occurrences of N/A are converted to the null object and so effectively removed.

This command let’s you delete values from records. It comes in 2 flavours:

The first variant will delete the field from all records, so that the field is no longer present. The second variant allows for conditional deletion of values by specifying an ID clause which is handled in the same way as it is during assignment. For instance: